Breeders in the spotlight

Every day our team of breeders lovingly and enthusiastically create new and special Phalaenopsis varieties. Besides Sion’s own varieties, we also present varieties from other leading and inspired breeders such as: Brighten Orchid, CJ Orchids, Clone, Hark/Bremkens, Piko Breeding, Roenbaek and Ter Laak Orchids. In short, a unique and complete range: from excellent standard varieties to special colours and specials. For each grower in every market segment.

Breeders in
the spotlight

‘We’ve been breeding orchids for decades’

As a traditional horticultural company founded in 1904, at Hark we’ve been involved in orchid breeding since 1949. It started with Cattleya crosses, and later moved on to crosses with Paphiopedilum. In the late 1950s, we added crossing with Phalaenopsis. The Paphiopedilum crosses in particular were the foundation and that’s where our breeding success began.

In 1963 the first orchid was registered with the RHS in the Sanders List of Orchid Hybrids, London (Paphiopedilum ‘Lippstadt’). The breakthrough in Phalaenopsis breeding came in 1967 with the first pink Phalaenopsis ‘Lipperose’ = ‘Ruby Wells’ x ‘Zada’, which stood the test of time as a cut flower variety. The cross is still known to growers today as ‘The German Pink’. In the years that followed, breeding with Phalaenopsis became increasingly popular. In March 1974, Hark was the first German orchid breeder to receive an FCC (First Class Certificates) from the RHS for the Phalaenopsis crosses of ‘Doris Wells’ x ‘Lipperose’ = ‘Lippstadt Diane’ and in the same year for Phalaenopsis ‘ Lippstadt Rosella’ as the most outstanding hybrid. More awards followed for Phalaenopsis ‘Zauberrose’, ‘Lippezauber Liebling’, ‘Lippstadt Elegance’, ‘Zauberrose Ingrid’, ‘Sesame Flamingo’, ‘Zauberrose Diamant’, ‘Morgenrot’, ‘Lippstadt Comet’ (Award of Merit, AM). At the World Orchid Conference in Frankfurt in 1975, Hark was honoured with 10 awards out of 29 plants exhibited. In 1979 Hark was also the winner of the International Orchid Cup of the German Orchid Society.

After Ingrid and Fritz Hark took over the company in 1986, the focus shifted to building up the plant cultivation laboratory. Breeding didn’t fall behind though. In fact, numerous varieties were used by our customers for their own production, and also for distribution to young plant customers. Anja Hark-Borrmann, who took over the management of the company together with her husband, Oliver Borrmann, in 2011, sees the breeding of new varieties as more than just a continuation of a tradition – it also represents an important investment in the future of her company. With the takeover of the breeding of Orchideen Bremkens in 2019, the range – especially in the segment of 9 cm and Multiflora varieties – was considerably expanded. Consequently, the genetic pool of our young plant company, Sion Young plants, is a bundling of the breeding activities from Hark, Bremkens and Sion. This means that with our breeding operation in De Lier, the Hark family’s passion for developing new varieties is now being successfully continued.

In recent decades, all Hark varieties have always been marked with a reference to where we come from: Lippstadt. Examples are Lipperose, Lippstadt, Lippezauber. Most of our crosses have always been easily recognisable by our breed number, which was always preceded by a “0” or an “H”. Varieties from the Bremkens range are always marked with a “B” before the variety number or usually with a cocktail name such as ‘Mai Tai’, ‘Hugo’, ‘Sangria’ and many others.

Although countless varieties are available to the grower today, the search for the best varieties is ongoing. Individual requirements for cultivation and assortment, as well as new challenges in production techniques make breeding work challenging. The Phalaenopsis has established itself in recent decades as the most successful ornamental plant on the market. The plants are appreciated by consumers for their variety and longevity, and can be grown year-round by growers. Despite fluctuating demand, seasonal challenges in production and, of course, enormous cost pressures, in the years to come, Phalaenopsis will still play an important role.

‘The secret behind successful breeding
is seeing things differently’

The next step in breeding

Most distinctive and beautiful varieties

Every day our team of breeders lovingly and enthusiastically create new and special Phalaenopsis varieties. It all starts in our nursery, where a selection of the strongest and most distinctive mother plants are housed. With years of experience, knowledge of plants and a good dose of imagination, we make the most beautiful crossings with these plants every year. Each new variety has to meet a significant amount of selection criteria. We look at shelf life, growth quality and distinctiveness in the market. 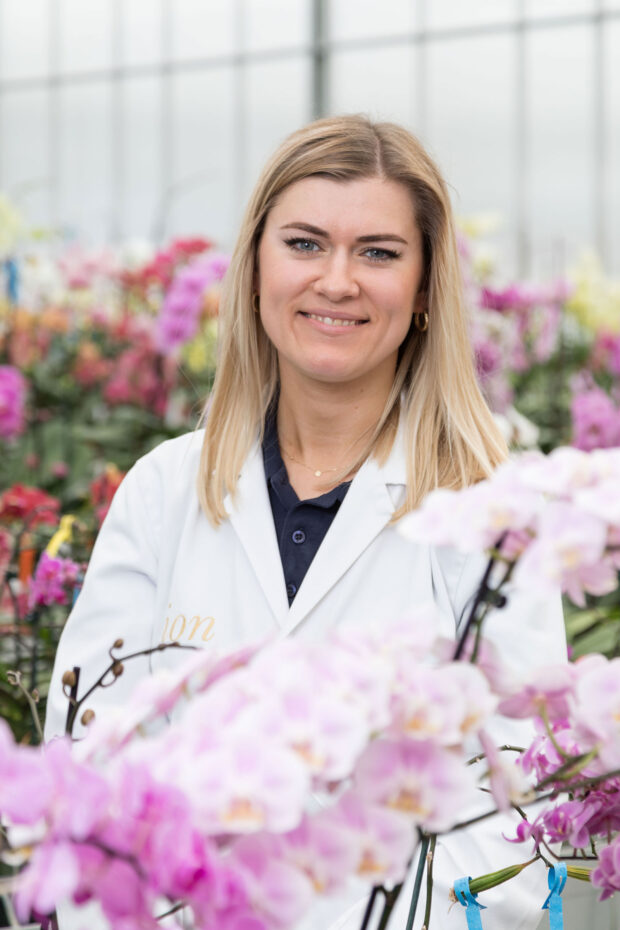 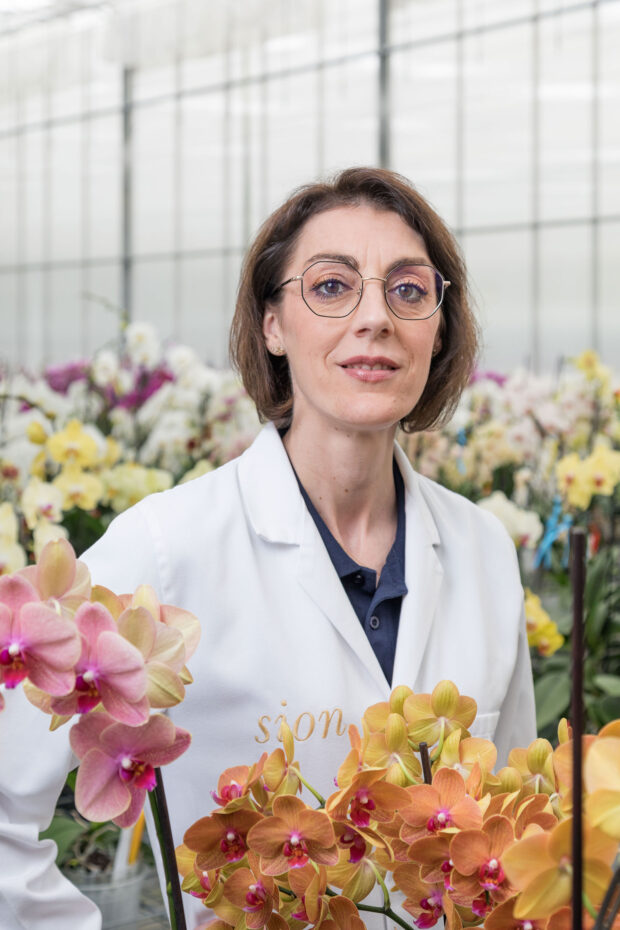 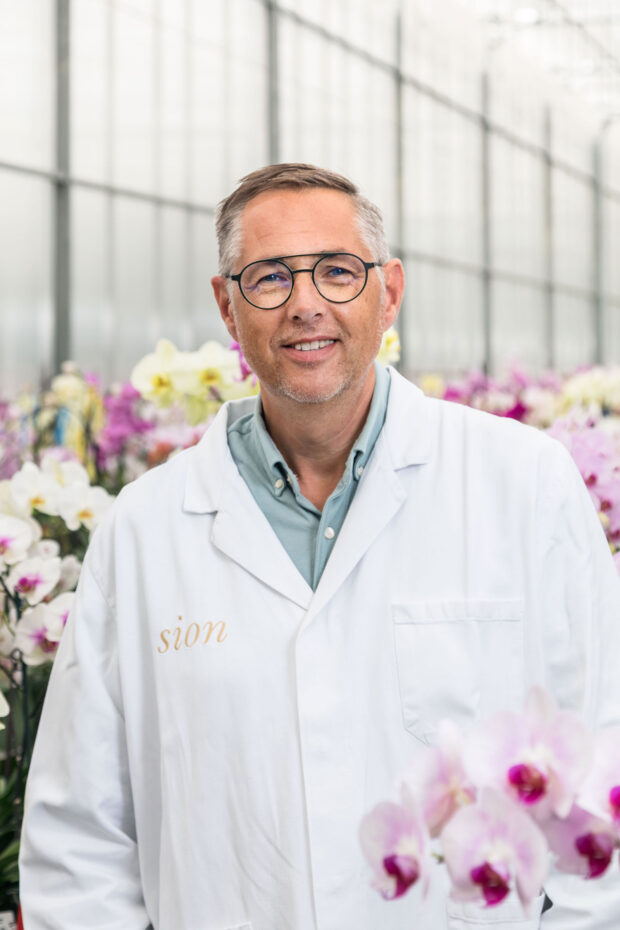 Thanks to the latest techniques and strict selection criteria, only the most distinctive and beautiful varieties remain. What’s more, together with our customers, we extensively test each new variety in practice. The result after proximately 8 years after the first crossing: the most special and distinctive Phalaenopsis varieties.

This is how we keep on surprising the market and the consumer! 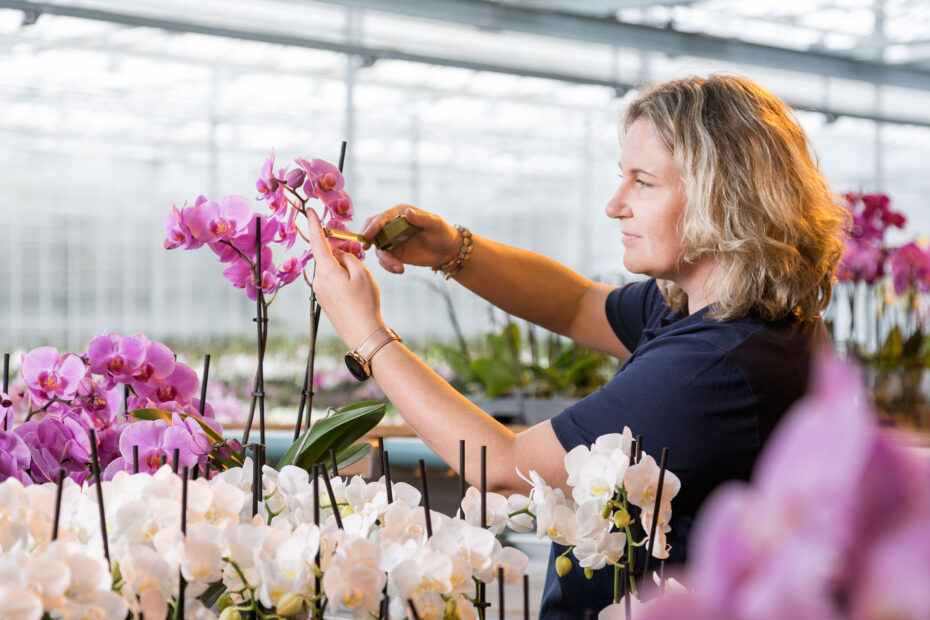 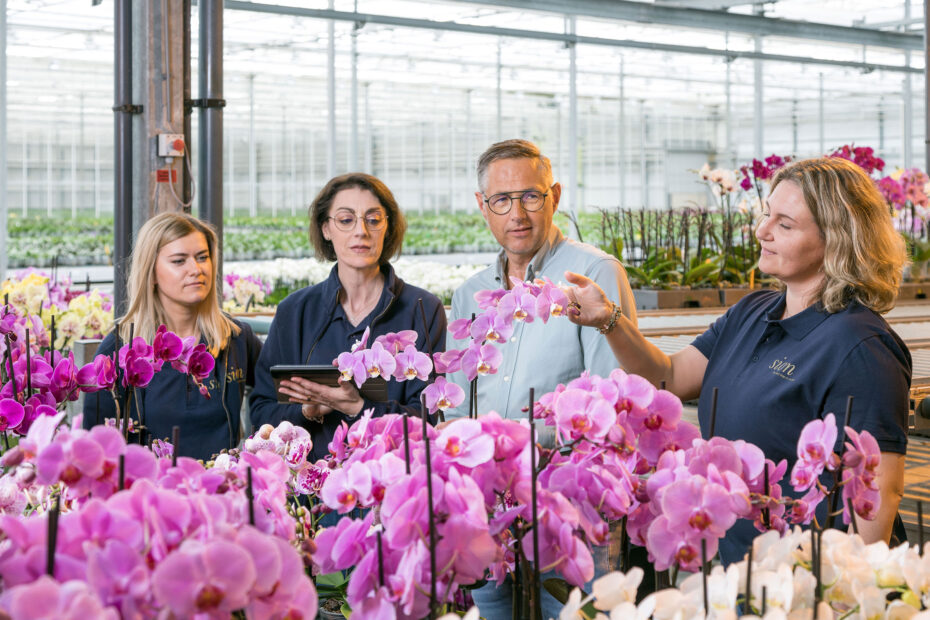 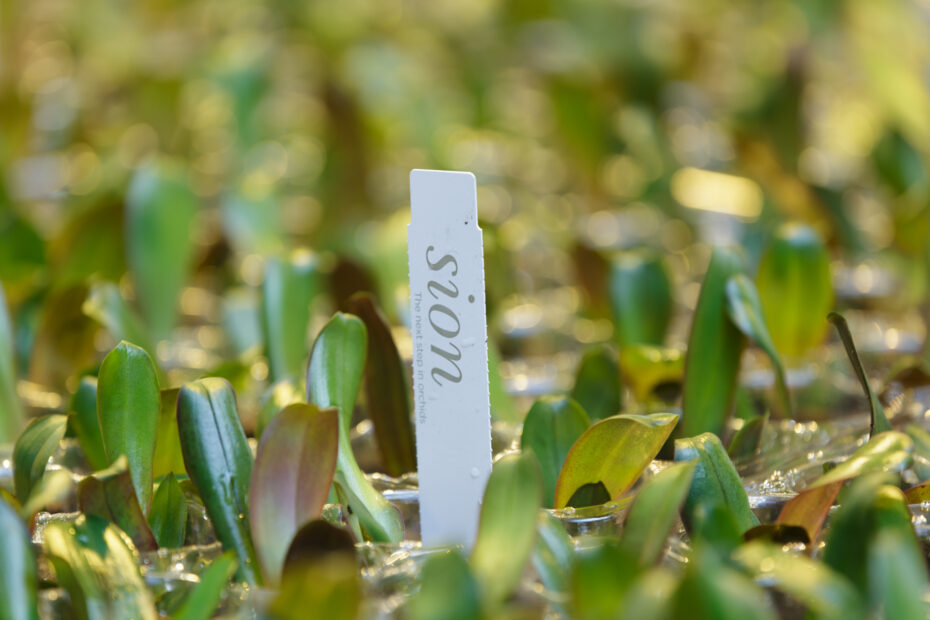 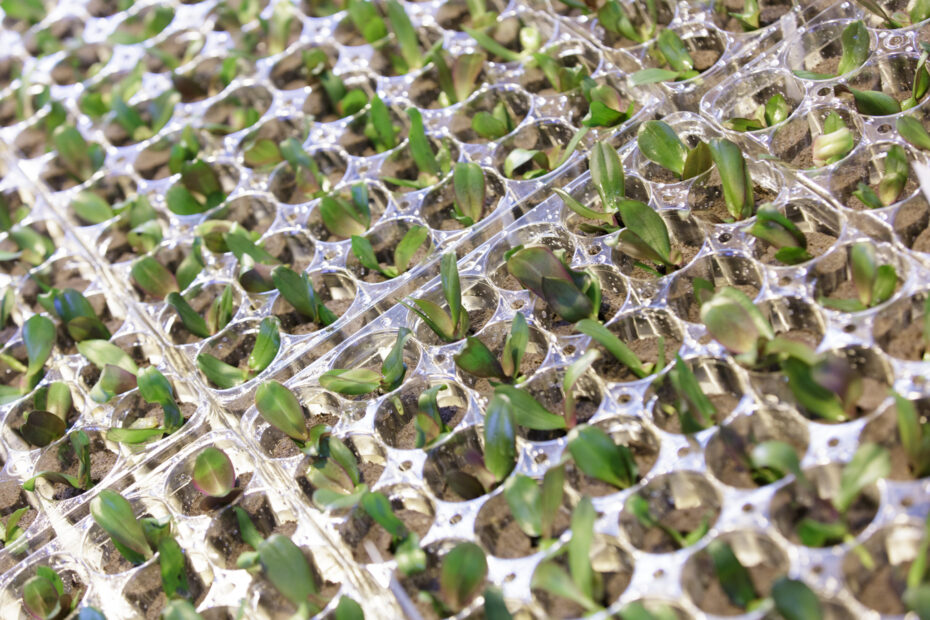 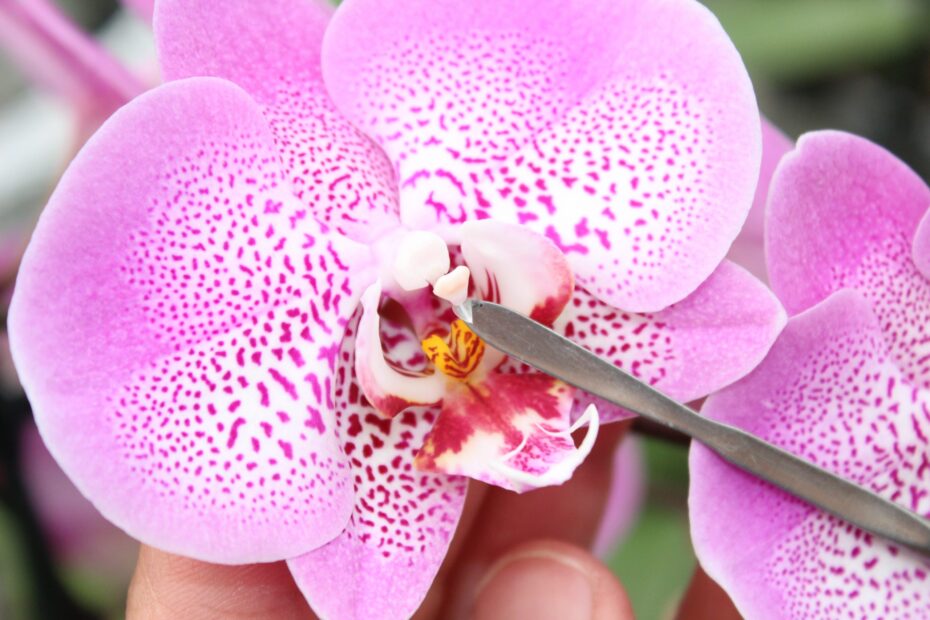 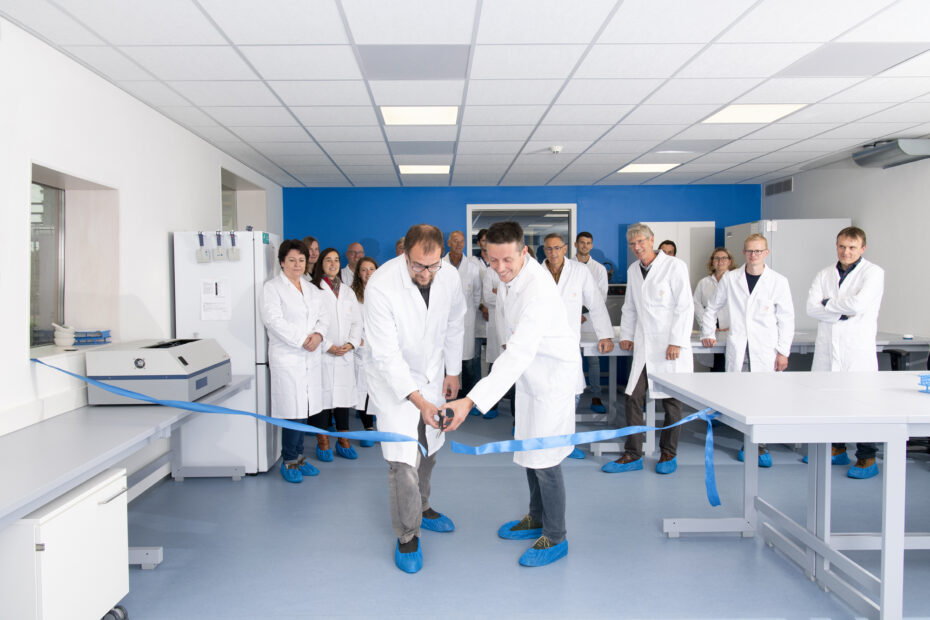 Find out more about (latest) breeds
will suit you best?

Thank you for your inquiry